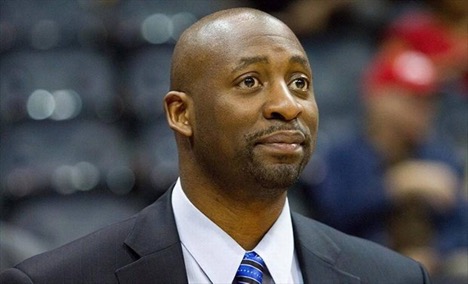 Adrian Griffin Assistant Coach, Toronto Raptors Adrian Griffin has over 12 years of NBA coaching experience with five different franchises: the Toronto Raptors, Oklahoma City Thunder, Orlando Magic, Chicago Bulls, and Milwaukee Bucks. Currently, he serves as an assistant coach for the Toronto Raptors under head coach Nick Nurse. Griffin joined the Raptors’ coaching staff in 2018 and proceeded to help guide the team to its first NBA Championship in franchise history. Griffin also led the Raptors to a top-5 defensive rating in the NBA in both 2018-19 and 2019-20 and worked closely with Raptors’ All-Stars Kawhi Leonard, Pascal Siakam, and Kyle Lowry. Before joining the Raptors, Griffin served as an assistant coach with the Oklahoma City Thunder for two seasons (2016-2018). Under head coach Billy Donovan, Griffin helped the Thunder reach the playoffs in both seasons and was on the coaching staff when Russell Westbrook was named NBA MVP in 2016-17. Griffin also spent one season (2015-16) as an assistant coach with the Orlando Magic. Griffin spent five seasons (2010-15) as an assistant coach with the Chicago Bulls. After helping Jimmy Butler become the NBA Most Improved Player in 2014-15, Butler said, “All my coaches had a lot to do with [my MIP Award], but I think Adrian Griffin had a lot because he had to deal with me just being unbearable. I think he has a lot to do with who I am.” During the summer of 2014, he worked with the USA Basketball Men’s National Team that captured the gold medal at the FIBA Basketball World Cup. Prior to joining the Bulls, he served as assistant coach/player development for two seasons (2008-10) with the Milwaukee Bucks. As a player, Griffin appeared in 477 career NBA games (179 starts) during nine seasons with Boston, Dallas, Houston, Chicago and Seattle, averaging 4.0 points, 3.2 rebounds and 1.4 assists in 16.8 minutes. He also played in 48 career playoff outings, averaging 3.4 points and 3.0 rebounds in 13.2 minutes and helped Dallas reach the 2006 NBA Finals. Griffin also played one season in Italy and three seasons with Connecticut of the CBA. In 1998-99, he was named CBA Most Valuable Player and also earned CBA Finals MVP, leading Connecticut to the league championship. Born on July 4, 1974 and a native of Wichita, Kansas, Griffin was a three-year starter at Seton Hall University. He has two daughters, Vanessa and Aubrey, and two sons, Alan and Adrian, Jr. He and his wife, Kathy, currently live in Tampa, FL as the Raptors have temporarily re-located there.