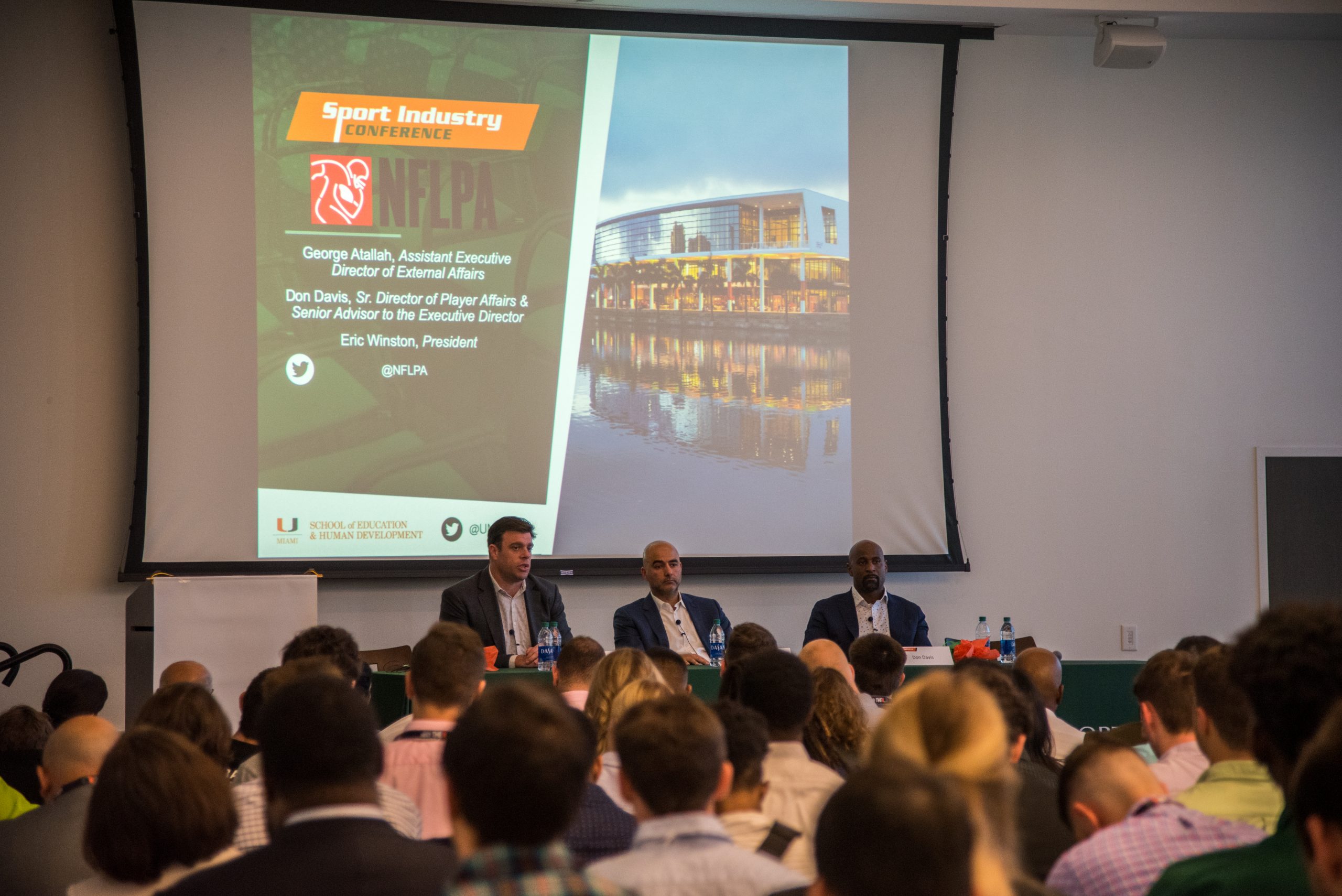 From the Super Bowl to basketball, soccer and esports, the fifth annual University of Miami School of Education and Human Development’s (SEHD) Sport Industry Conference offered a variety of learning and networking opportunities to UM students. “Our conference is growing in its influence,” said Erin McNary, assistant professor in the Department of Kinesiology and Sport Sciences at the SEHD and organizer of the event. “It gives our Sport Administration students a forum to discuss pressing issues in the field including human trafficking, sustainability, and social media.”

More than 400 students, alumni, and industry professionals attended the information-packed January 28 conference at the UM Shalala Student Center, attracting speakers and visitors who were in Miami for Super Bowl LIV on February 2 at Hard Rock Stadium. “The sessions were very enlightening,” said Mary Lane Herman, a senior at the University of Tennessee at Martin who was a volunteer for the big game. “I’m interested in a career in sports and entertainment law, and learned a lot about esports that was new to me.”

An afternoon panel of seven women addressed the human trafficking that surrounds large sporting and entertainment events, such as the Super Bowl, in “Trafficking, Sports, and the Spike.” As co-chair of the Miami Super Bowl Host Committee/Women’s Fund of Miami-Dade Official Stop Sex Trafficking Campaign, McNary thanked the many nonprofit organizations and volunteers who worked to raise awareness of this year-round worldwide issue.

Another panel on the “NFL Players Perspective” was led by National Football League Players Association (NFLPA) President Eric Winston, BA ‘05, who played for the Hurricanes before spending 12 years in the NFL. Along with player safety and collective bargaining rights, the NFLPA helps players transition from football to the next stage of their lives.

Other panel discussions focused on sustainability initiatives in sports and the effective use of social media by athletes. In the latter panel, TJ Adeshola, U.S. Sports Partnerships, Twitter, emphasized the importance of authenticity. “Use your own voice, whether playful, serious, or intellectual. The challenge for athletes is not to use someone else’s template.”

At the end of the conference, UM Athletic Director Blake James encouraged UM students to take advantage of a networking reception with sports professionals, as well as the keynotes and panel sessions. “There is value to everything here at the conference,” he said. “Start building your personal brand, reach out to other attendees, and stay in touch with our university.”