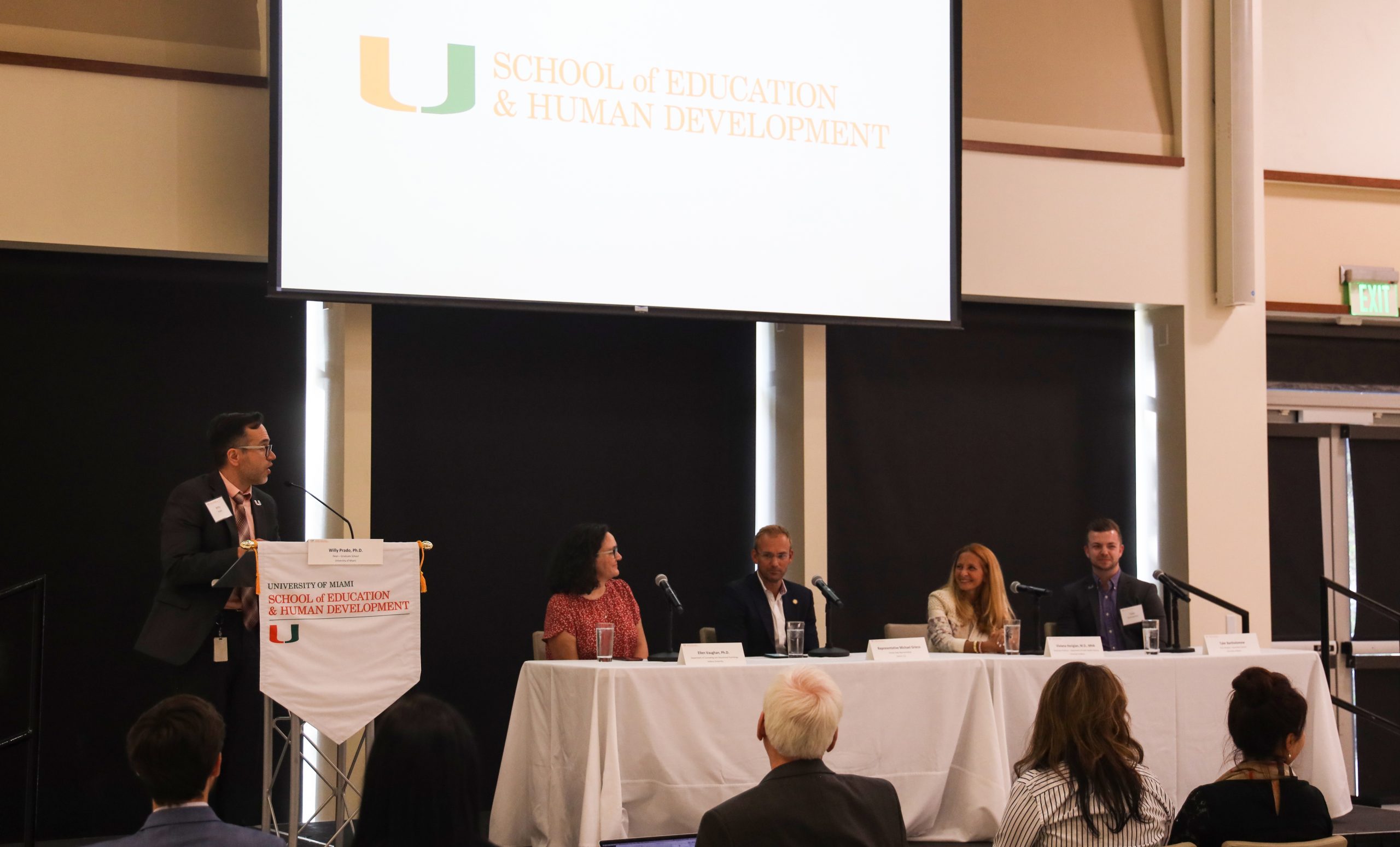 The Centers for Disease Control and Prevention reported that between the years of 1999 to 2017, more than 700,000 people died from a drug overdose. The number of deaths that involved opioids was six times higher in 2017 than it was in 1999.

The University of Miami School of Education and Human Development invited five key stakeholders and leaders in the field to a panel discussion that addressed the implications for prevention and treatment in tackling the opioid epidemic.

“We bring together thoughtful leaders and change agents to help advance action in critical areas that affect individual well-being, such as the opioid epidemic,” said Laura Kohn-Wood, Ph.D., dean of the School of Education and Human Development, who gave welcoming remarks and opened the panel discussion.

The audience, which included students, alumni, supporters, and friends from the University, listened intently as Guillermo J. Prado, Ph.D., dean of the University of Miami Graduate School and professor of public health sciences at the Miller School of Medicine, introduced each panelist. Dean Prado served as moderator of the panel.

Dean Prado also presented alarming statistics from the Centers for Disease Control and Prevention to the audience on the opioid epidemic, which claims the lives of 130 Americans every day.

“Drug overdose deaths, including those involving opiates, continue to increase in the United States for both genders and across most age groups. The percentage increase in opioid overdose nationwide, between 2016 and 2017, increased by 30 percent,” Dr. Prado said. “Around 75 percent of the annual drug-related deaths were caused by opiates. Overdoses involving opiates have killed more than 47,000 people in 2017 alone, and 36 percent of those are attributed to prescription opioid misuse.”

Dr. Vaughan, who is also an alumna of the Ph.D. program in Counseling Psychology from the Department of Educational and Psychological Studies at the School of Education and Human Development, said that responses to the epidemic, specifically in Indiana, resulted from a growing knowledge that the state also has an opioid crisis.

“There is a county in Indiana called Scott County that, in a span of about a year and a half, had about 200 HIV cases. In the 10 years prior to that, there were about 10. So, in a very short period of time, the opioid crisis really came home for the people of Indiana.”

Dr. Vaughan shared with the audience that Indiana University has been committed to addressing the crisis in the state, committing $50 million in funding from the Grand Challenges Program. Dr. Vaughan is involved in two of its projects and she is currently developing an addiction counseling program.

“My work is really around thinking what counselors need to know, how do we teach them about treatment, how do we teach them what syringe service programs should look like, and how to achieve goals in a team setting,” Dr. Vaughan said. “That is a primary area around the opioid response. I am also leading a clinical trial on emerging adults with mild to moderate substance use disorders.”

The Opioid Addiction Task Force, the Office-Based Addiction Treatment clinic housed at UHealth, and the IDEA Exchange are a few initiatives in Miami-Dade that are treating the opioid epidemic.

The Task Force, as discussed by State Rep. Greico, identifies the best practices in deterring new users and addresses holistic and comprehensive care to those who are struggling with opioid use disorder. It also looks at healthcare solutions, the role of the justice system in opioid prevention, and raises awareness and knowledge on misuse.

The Adult Drug Court in the Eleventh Judicial Circuit of Florida, for example, is a volunteer diversion and treatment program that is open for defendants in substance abuse cases. While under the supervision of the presiding judge, the program provides people with rehabilitation services for a minimum of one year.

The Office-Based Addiction Treatment clinic is housed in a primary care clinic at the University of Miami Health System – one of six health systems in the United States that are participating in a service implementation grant. Its mission is to increase the number of patients who seek medication-assisted treatment, as well as to help guide health system leaders with information when deciding on treating opioid-use disorder in primary care.

“Through this implementation grant, patients with opioid use disorders have access to life-saving medications within the mainstream of care. The goal of this grant is to address barriers to the prescription of medication-assisted treatment by providers,” Dr. Horigian said. “We are supporting a collaborative care model, where a nurse screens for appropriateness for the service and supports the patient in the recovery process.”

Physicians and nurses provide confidential services, such as the evaluation of opiate use disorder, patient-centered care, as well as overdose education, training, and guidance on how to use Narcan, which treats overdose in an emergency situation. They provide medication-assisted treatment for addiction using buprenorphine for individuals who have had an opiate use disorder.

Bartholomew and Dr. Tookes also spoke at length about the IDEA Exchange – a syringe service program (SSP) in Miami-Dade that opened its doors on Dec. 1, 2016. The SSP provides new syringes in exchange for used ones for people who inject drugs, as well as other harm reduction services to reduce the spread of HIV, Hepatitis C, and other blood-borne diseases. The IDEA Exchange also provides Narcan for free to its patients. To date, the IDEA Exchange has distributed over 3,200 boxes of Narcan with 1,600 self-reported overdose reversals.

“I am most proud of my work with the IDEA Exchange, specifically in the decrease of opioid-related overdose deaths in Miami-Dade since we started our naloxone distribution program. Opioid-related overdose deaths have decreased by nearly 50 percent since 2016 in Miami-Dade, with a reduction of over 100 deaths between 2017 and 2018,” Bartholomew said. “That is 100 lives saved from our work, not only through our overdose prevention program but by creating a movement that embraces harm reduction among community stakeholders, particularly law enforcement and first responders.”

In 2019, the state legislature passed a bill to expand the program statewide with approval by county commissions.

Panelists also elaborated on other factors that need to be taken into consideration when treating a patient with opioid use disorder, as well as in prevention components, such as genetic and geographic factors. This includes family history and the area where an individual resides.

At her closing, Dean Kohn-Wood further emphasized various resources that are available to individuals and families in the community. These include the Institute for Individual and Family Counseling and the Culturally Informed, Flexible Family-Based Treatment for Adolescents, as well as the IDEA Exchange, the Office-Based Addiction Treatment Clinic, and the Opioid Addiction Task Force.