Research explores how the brain functions 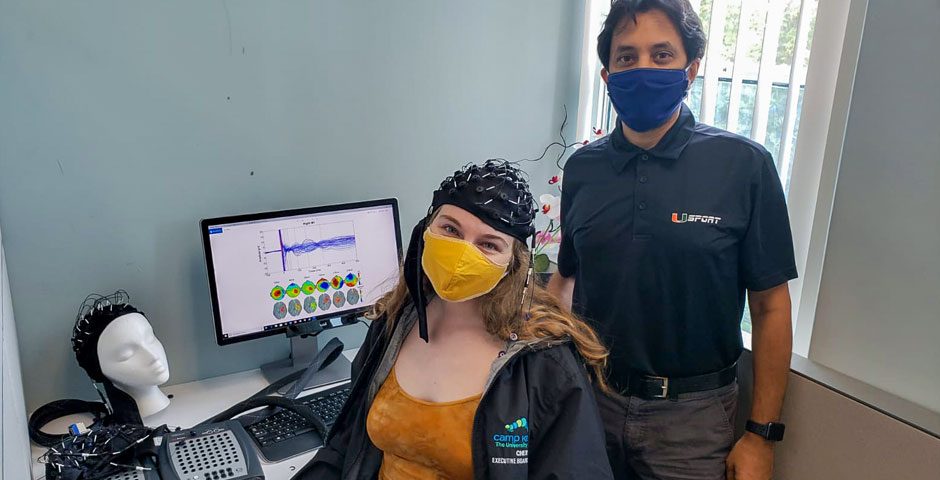 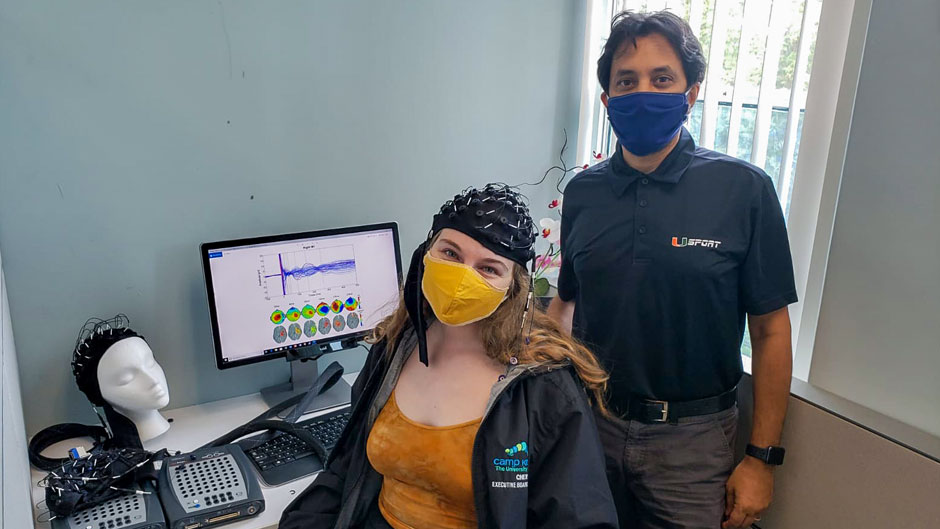 Brian Anwari, clinical associate professor, can answer many questions about how our brains work.

What does each part of the brain do and why?

Can we communicate with a patient in a coma?

How does continual cell phone screen-time affect us?

These are the kind of questions that Brian Arwari ponders every day. A cognitive psychologist by training, he leads the neurocognitive lab in the Department of Kinesiology and Sport Sciences of the University of Miami School of Education and Human Development, where he is a clinical associate professor.

The lab runs tests on the human brain and explores the relationship between exercise and cognition, as well as how the brain functions under various circumstances. Using electroencepholography technology, Arwari and his team can get a fully detailed map of the brain and its functions.

“When you think of an EEG cap scanning the brain, you think of squiggly lines or ink on paper,” said Arwari. “But we get more than that. We get brain maps.”

Those maps tell stories. Different color ripples signal brain activities. Brain waves expanding from a position on the scalp show that the brain is reacting to something. This can be crucial in the diagnosis of many conditions.

In an ongoing study that Arwari is carrying out in conjunction with University neurologists Dr. Kristine O’Phelan and Dr. Ayham Alkhachroum at Jackson Memorial Hospital, the team is measuring different sounds and words to determine if they can predict whether the patient will have a higher chance of waking up from a comatose state.

“The most important question for a family member of a comatose patient is: ‘Will they wake up?’,” said O’Phelan. “This research is really important, because it allows us to study a patient in the first few days after they became comatose. We are looking at a patient in a time period in which we are making decisions about life support.”

In the past, O’ Phelan said, doctors approached coma patients and talked to them and sometimes gave them a “painful stimulus” to see if they reacted. Often, if the patient did not physically react, it was assumed that there was no response produced by their brain or that there was very little activity in the brain.

“But these tests give us a glimpse into the brain activity of a patient that is otherwise not responding,” O’Phelan pointed out. “So, if there is something, we can do in the first two weeks. Then it will be a game changer.”

In this study, the patient wears a cap with attached electrodes that allows for brain mapping. The patient is exposed to different sounds. In some cases, when the sounds are even and melodious, the brain scan is steady. If a jarring sound is introduced, some of the patient’s brain scans show a marked change.

This signals that the patient can hear and that the brain is processing stimuli. And it may be an indication that there is a good chance the patient will come out of the coma, explained Arwari. In one of the tests used to gauge whether the patient understands verbal communication, the patient in a coma is given two sentences with different last words.

The first one makes sense: “In the morning, I drink coffee.”

The second one does not: “In the morning, I drink shoes.”

If the brain scan shows major changes, the patient may be cognizant that the second sentence is not correct. It may also indicate that the brain is functioning at a higher level than previously assumed.

The experiment, called Biomarkers of Consciousness Recovery, has just begun and will continue for the following six months.

Other lab studies aim to learn how the brain reacts to new technology. Gabi Aklepi, a 2020 graduate of the School of Education and Human Development, worked as a research assistant at the lab for four years. She is now a first-year medical student at the Leonard M. Miller School of Medicine.

In a recent study, she helped create programs to assess the relationship between cognition and screen time use on an Apple iPhone.

The assessment became easier after Apple started issuing records of screen time data on a daily and weekly basis through their iOS, she said.

Initial lab tests indicated that extended exposure to screen time would mostly affect working (short-term) memory. The lab was set up to conduct a more extensive run of tests to explore this when the pandemic hit, and the testing was stopped.

“But it is very important to test the effects of screen time,” said Aklepi. “We now have an entire generation on their phone a lot. And it is imperative that we assess the effects this causes because maybe any serious effects could be prevented.”