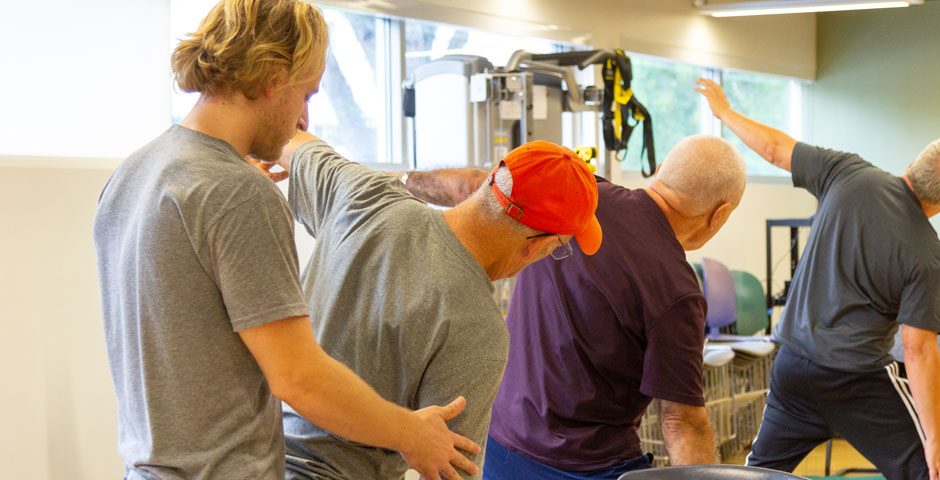 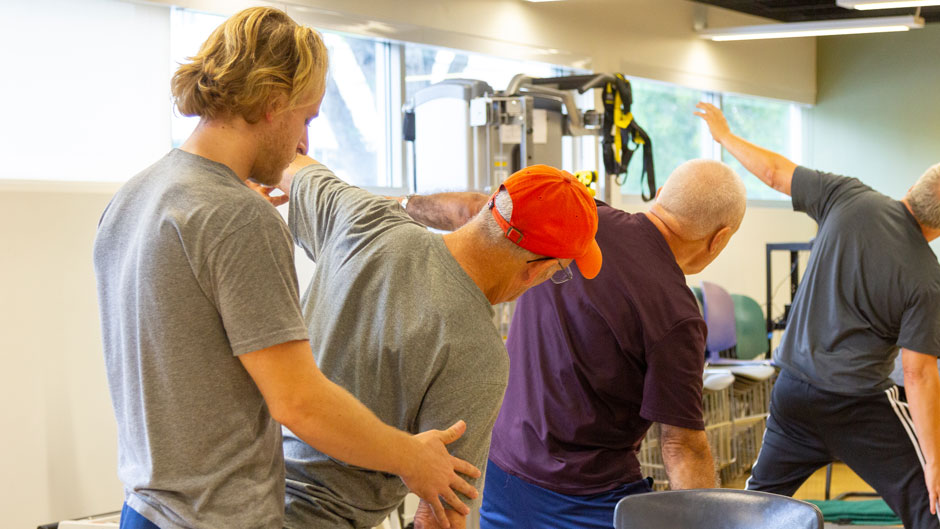 A new study conducted by the Department of Kinesiology and Sport Sciences is showing improvements in balance and mobility for Parkinson’s patients.

At first glance, it looks like a regular Yoga class. Four men sit on floor cushions while following the instructions of their teacher, heads bowed.

But as the class progresses at the University of Miami’s Max Orovitz Laboratory, the instructions from graduate student and teacher Nick Cherup seem to be much more elaborate than a regular yoga class.

“Close your eyes and think of what it will feel like to move into the warrior pose.”

“Imagining what your body may look like, travel to the front of the mat and do a full body stretch.”

“Where is your pelvis in relation to the rest of your body?”

This is Yomed, a blend of yoga and meditation, which is at the core of a study headed by Joseph Signorile, a professor of Kinesiology and Sport Sciences, that strives to help Parkinson’s patients improve their balance and proprioception (perception or awareness of the position of one’s body).

Parkinson’s disease is a non-curable neurodegenerative disorder that affects nearly 1 million people in the U.S. Patients with the condition suffer from rigidity of the muscles, tremors, and walking and balance problems. April is Parkinson’s Awareness Month.

The UM study, which began last semester and has included 36 participants so far, compared two groups of Parkinson’s patients. One group was trained to improve balance and proprioception with a traditional method that involves complicated equipment such as Bosu balls and balance boards; the other group only took Yomed classes twice a week for 45 minutes. By every measure, the group that took Yomed improved in almost every category.

“We start off with the elements of yoga but then we are adding two different elements designed to improve their balance and proprioception through mental exercise,” said Signorile.

Both elements heighten the patients’ awareness of their bodies, muscles, and strength. Signorile said that anyone can benefit from this type of gentler training (especially older adults); but for the Parkinson’s patients the movement patterns help reduce symptoms.

“We are not treating the disease,” said Signorile. “We give them the intervention that will give them better balance and a better understanding of where they are in space.”

Steve Krull, a retired news and sports editor from WTVJ-NBC 6, was diagnosed with Parkinson’s a year and a half ago. Always an avid exerciser, Krull decided to take the Yomed class to help him with his balance and stiffness. He notices a difference.

“I feel more nimble now,” he said, adding that he felt that since he always exercised, his symptoms tend to be mild.

Alfonso Penant, a retired public school teacher who was diagnosed with Parkinson’s disease six years ago, has been taking as many exercise classes as he can to deter the stiffness and tremors of the disease. His classes include boxing and spinning. But up until now, he could never find a Yoga class he could stick with.

“This is the longest that I have been in a class,” he said. “I like the instructors and I believe that it is helping.”