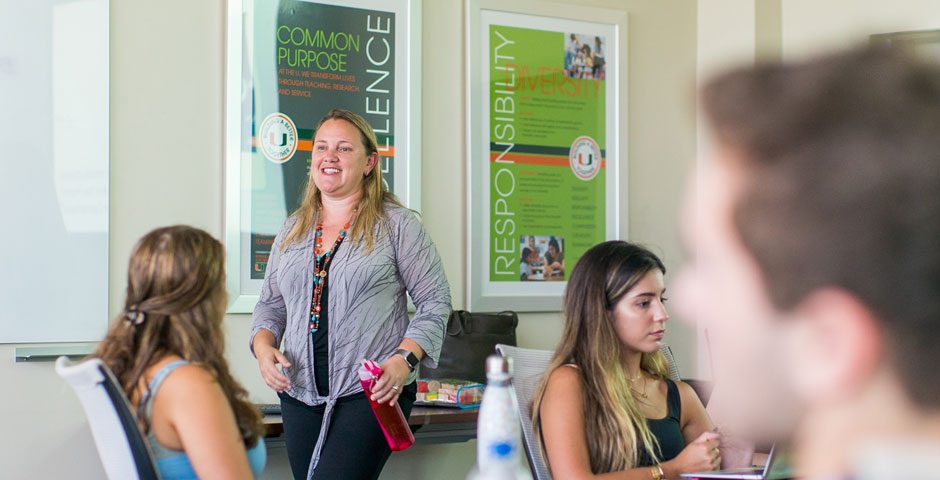 Offered by the School of Education and Human Development, the course looks at the daily life experiences of people with disabilities and how they adjust.

All persons with hearing disabilities can read lips.

People with disabilities are more comfortable with their own kind.

The blind acquire a sixth sense.

All of the assumptions above are misconceptions our society has created about people with disabilities that often promote stereotypes and can set limitations for the recipients. This semester, a group of University of Miami students enrolled in a School of Education and Human Development (SOEHD) class called “Contemporary Issues in Disabilities Studies,” are learning to debunk these myths.

Taught by Kirsten Schwarz, a lecturer and speech pathologist who has taught at UM for 14 years, about 15 students signed up for the course, which is interdisciplinary and not just for future educators. It is the first time such a course is offered at the University.

“It is interdisciplinary because there may be people who are going into medicine or advertising who do not know enough about people with disabilities who would be interested in the course,” said Schwarz. “Our mission is to create more awareness about people who have disabilities.”

Sophomore Jennifer Acevedo is a student in the School of Nursing and Health Studies who hopes to become a medical doctor. She enrolled in the class because she felt knowledge about different kinds of disabilities could only help her as a physician.

“It should help me break down the barriers that we sometimes have in dealing with people with disabilities,” she said.

That is one of the goals of the course, which fits well into the Culture of Belonging that UM President Julio Frenk outlined in his roadmap for the University. The curriculum includes exploring different kinds of disabilities, both physical and mental, that include autism, cognitive deficiencies, Down syndrome, deafness, blindness and others. The class will also provide information on the many local organizations that help and/or hire the disabled.

The course will also look into contemporary issues that individuals with disabilities face with an emphasis on personal aspects of dealing with a disability in daily life.

“I hope to go into what they go through in daily life from activities in the community, issues about housing, assisted technology, therapy options and costs, transportation, independence and self-care, recreation and health care,” said Schwarz.

Creating a judgement free classroom where students feel free to ask questions without fear is crucial, said Schwarz. In the coming weeks, she will invite panels of people with disabilities to the class. She told the students that they could ask any questions as long as it was done respectfully.

Schwarz also warned students that they would delve into issues that might strike an emotional chord.

That resonated with senior Tristen Manley, who is a political science major, but signed up for the class to learn more about the laws that protect people with disabilities. He has a cousin who is legally blind and three others who have autism.

“What I have noticed is that it makes some people uncomfortable,” he said. “They don’t know how to interact with them.”

Humanizing people with disabilities is also a part of the class. Schwarz spent some time talking about using “people first” phrases when talking about a person with a disability. Instead of saying “the autistic child,” say “John, who has autism,” she said.

In the coming weeks, students will read books and watch films relevant to the course, including the novel Wonder by R. J. Palacio, about a boy with a facial deformity, and The Reason I Jump, by Naoki Higashida, about a 13-year-old boy with autism.