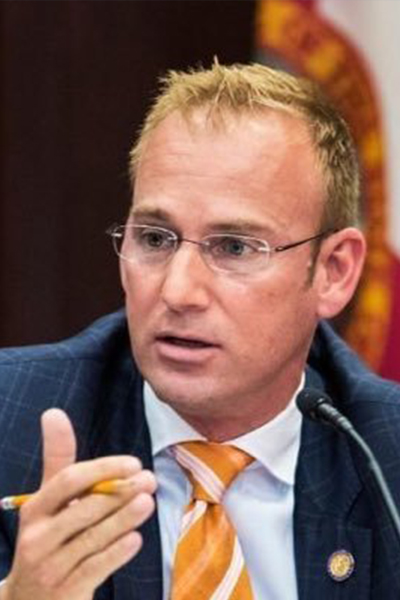 Elected to the Florida House in 2018, Representative Michael Grieco has always maintained his commitment for independent thought and availability, even before his time in the State Capitol. When he was first elected to the Miami Beach City Commission in 2013 he even took office door off the hinges his first week in office as a symbol of transparency in government, only to do the same now in Tallahassee. In his first years in local office, Grieco focused his efforts on both big and small ticket items ranging from environmental initiatives to traffic solutions and further improvements to education. Michael continues to fight for the disenfranchised and voiceless members of our community by putting residents’ quality of life above all, as he believes the role of government is to first protect lives and then improve them. In his first year in Tallahassee, Representative Grieco passed two substantive bills, one expanding protections for stalking victims and the other saving Florida condominium owners over $5B, money that would have been lost to unfunded State mandates. Rep. Grieco also secured and/or sponsored over $4M in appropriations for his home district. The Representative currently sits as the Ranking Minority member of the House Criminal Justice Subcommittee and was recently appointed by the Speaker of the State House to the Nominating Committee for the State Public Service Commission.

Representative Grieco currently sits on Adrienne Arsht Center Trust Board of Directors, the Board of Governors for the Miami Beach Chamber of Commerce and is a member of the President’s Cabinet for the Miami Children’s Hospital Foundation. Michael is a long-time Mount Sinai Hospital Young Founder and SAVE Young Guardian, and previously served on multiple city boards before being elected to the Miami Beach City Commission. Rep. Grieco is a perpetual philanthropist, as he has organized and/or acted as title sponsor for multiple causes including Miami Children’s Museum, Big Brothers Big Sisters, and as well as both the Mount Sinai and Miami Children’s Hospitals. As a community leader Michael previously sat on the Board of Directors for the South of Fifth Neighborhood Association.

Following his undergraduate career at American University in Washington, DC, during which he worked in both the US Congress and at C-SPAN, he moved to the greater Miami area in 1997 and soon after moved to and fell in love with Miami Beach. After graduating from the University of Miami School Of Law in 1999, Michael started his legal career as a Miami-Dade Assistant State Attorney. As a prosecutor he learned about not only the rule of law, but its application throughout the county. Michael excelled in the office, spending a majority of his six years focused on Gang and Narcotics enforcement before becoming a supervising Felony Division Chief in 2005. Michael then opened his law practice in 2007, choosing to become a small business owner. He has since built a successful boutique trial practice focused on criminal defense and victim advocacy and can be seen regularly on MSNBC and CNN opining on legal issues and high profile trials. Michael has a 11-year-old son who he considers his main motivation to seek local office. He wants his son to grow up in an area he is proud of, and he is worried we could be headed in the wrong direction due to lack of true leadership. Michael is a homeowner who has lived in condos in both historic Flamingo Park and on West Avenue, as well as a pre-1942 single family home in Mid-Beach before settling South of Fifth about nine years ago.