In recent years, KinaTrax’s leading-edge motion analysis technology has helped track more than 1 million pitches for Major League Baseball (MLB) teams like the Boston Red Sox, Chicago Cubs and Tampa Bay Rays.  Now, researchers in the School of Education and Human Development (SEHD) will be able to use this markerless motion capture technology for studies in biomechanics, thanks to a new system donated by the Boca Raton company.

“The recently installed system in the Sports Medicine and Motion Analysis Laboratory at the Max Orovitz Laboratories is a state-of-the-art markerless motion capture system,” said Moataz Eltoukhy, associate professor, Department of Kinesiology and Sport Sciences (KIN), and associate professor of Industrial Engineering.  “KinaTrax has applied artificial intelligence (AI) to the field of biomechanics, opening the door to exciting research possibilities.’

Steven Cadavid, Ph.D. ’11, president, KinaTrax, said, “It is our pleasure to donate to the U. The research being done in the Orovitz Laboratories can benefit from our markerless technology.  Through this donation, researchers can collect new data, conduct validation studies and develop models that go well beyond baseball.”

KinaTrax's proprietary technology captures, analyzes, and provides a three-dimensional reconstruction of a subject's motion without the use of markers or other devices worn by the subject, added Eltoukhy.  “It takes time to place multiple markers on each subject and remove them after the study. This markerless system also benefits participants, students and faculty conudcitng research in the time of COVID-19.”

For example, physicians could send individuals with Parkinson’s disease to the Orovitz Laboratories for contactless motion analysis using the KinaTrax system. “They could watch the study using a telemedicine platform, review the data and adjust medications if needed,” said Eltoukhy. “It’s a convenient solution for both patients and physicians.”

KinaTrax’s motion capture system consists of eight high-speed cameras mounted in a circular configuration surrounding the subject.  The system combines a proprietary algorithm, a Deep Neural Network and computer vision techniques to automatically track a subject's position on a frame-by-frame basis.  That stream of data can then be seamlessly imported into Visual3D software to perform the biomechanical analysis, added Eltoukhy.

Eltoukhy said the system can be used in many types of studies involving injury assessment, gait analysis, balance, and athletic performance.   For instance, Zachary Ripic, a KIN graduate student, is already working with the Hurricanes’ baseball team. “Having this system in Orovitz will help us analyze players’ motions,” he said.

Cadavid said KinaTrax’s technology has been installed at more than 30 baseball stadiums round the country, where it is used to assess shoulder, ligament and tendon injuries, while helping coaches improve athletes’ performance.  “I’m proud to say we helped the Chicago Cubs go almost injury free in 2016 and win the World Series.” 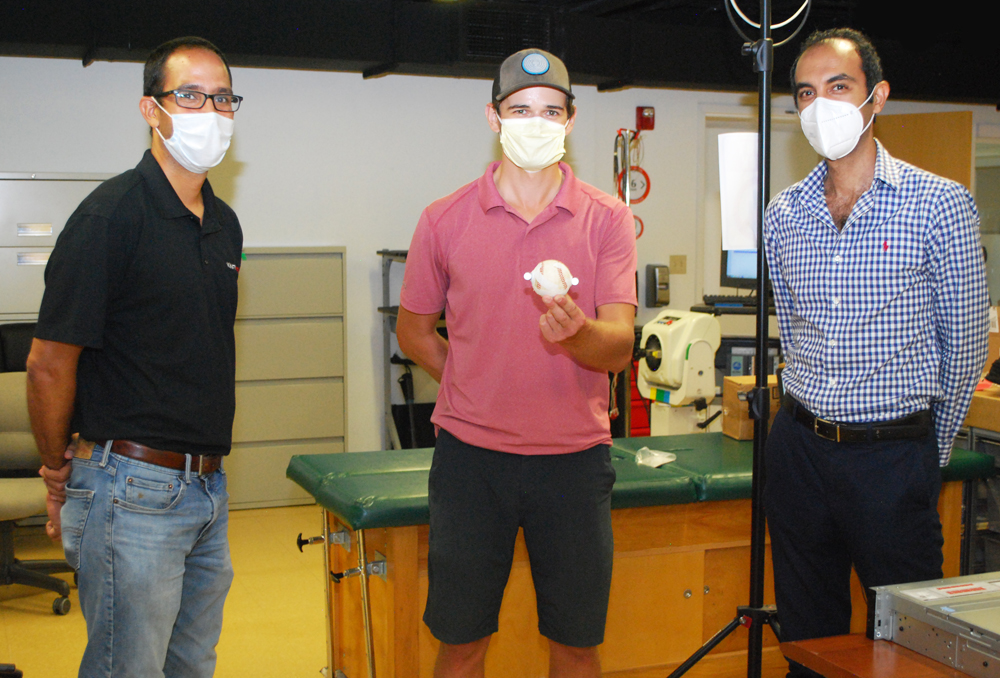