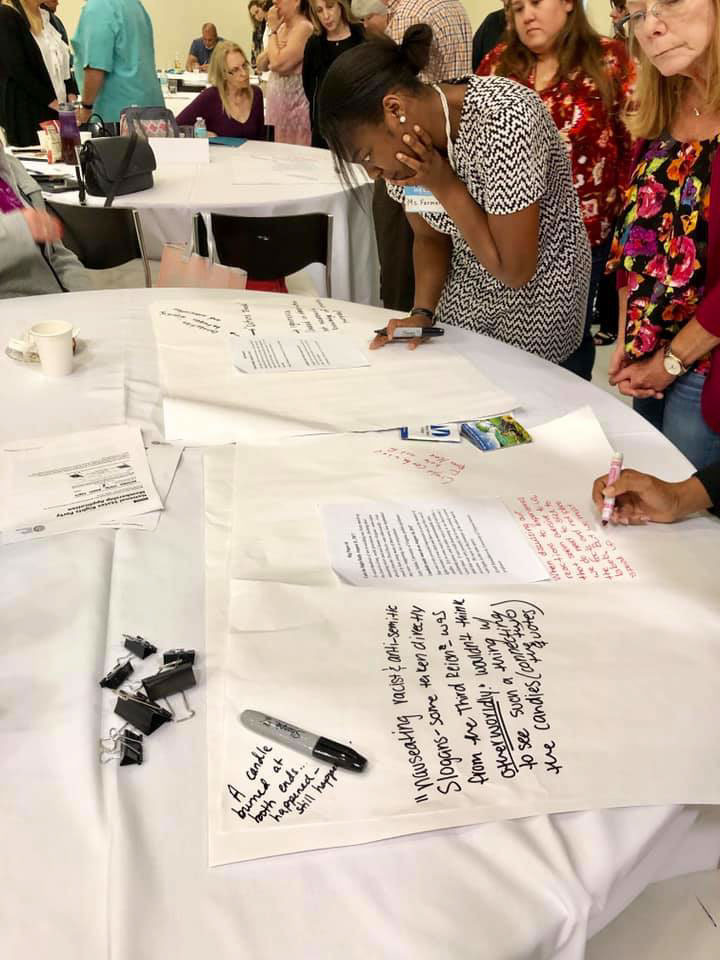 Teachers can play a major role in addressing the rising incidence of hate crimes in the United States, according to Dr. Mary Johnson, senior director, Facing History and Ourselves. “We need to help students feel comfortable with living in our diverse society,” she said in a keynote talk at the 19th Holocaust Studies Summer Institute, held June 11-14 at the Newman Alumni Center. “That means helping them go beyond a ‘we’ versus ‘they’ mentality.

Educating students about the horrors of the Holocaust and the continuing threats of racism and anti-Semitism in America today is vital for maintaining a healthy democratic society, added Johnson. She also encouraged teachers to reach out to emotionally isolated students who may be vulnerable to the recruiting of white nationalist hate groups.

Her remarks received resounding applause from more than 75 Miami-Dade County Public School teachers at the annual professional development session. “We can modify our students’ thinking and support powerful ideals reflecting brotherhood and the need to get along,” said Krishna Chandra Das, who teaches psychology at Coral Reef Senior High School.

Dr. Miriam Klein Kassenoff, a child of the Holocaust and founding director of the University of Miami Holocaust Teacher Institute Team, led the annual professional development institute, sponsored by the University of Miami School of Education and Human Development and the Miami-Dade County Public Schools Division of Academics, Department of Social Sciences. Other supporting UM institutions were The Sue and Leonard Miller Center for Contemporary Judaic Studies and the George Feldenkreis Program in Judaic Studies. Shawn Post, associate professor, Department of Teaching and Learning, serves as liaison to the institute.

“This is a truly outstanding program,” said Dean Laura Kohn-Wood, who attended the first day of the institute. “It’s also thrilling to share the presentation with dedicated teachers who are alumni of our school.”

During the four-day institute, Christina Chavarria, program coordinator, Levine Institute for Holocaust Education at the United States Holocaust Memorial Museum, discussed the “Rise of Nazism” and “America’s Responses to the Holocaust.”

Kassenoff, told attendees the dramatic story of her escape from the Holocaust in June 1941 with her family. She ended the week by having herself and other survivors from the community – including Dr. Peter Tarjan, professor emeritus from the University of Miami – give testimony of their coming to America and asking teachers to tell and re-tell their students about the survivors’ stories of hope, resilience and survival.

Other presenters included Dr. Michael Berenbaum, included Dr. Michael Berenbaum, founding project director of the United States Holocaust Memorial Museum, who spoke on “Confronting Anti-Semitism Today: What Can We Do?” and Dr. Kori Street, senior director of programs, University of Southern California SHOAH Foundation, whose topic was “Using IWITNESS in the Classroom.”

In her talk, “The Persistence of Hate in America: Anti-Semitism and Racism,” Johnson said the ideology of white nationalism dates back more than a century to the discredited “eugenics” concept of the late 1800s. “The central idea is that a pure, white America is somehow stronger than a society with mixed races,” she said. “Somehow, they also blend their racism with anti-Semitism.”

She presented a video of the August 2017 “Unite the Right” rally in Charlottesville showing white hate groups chanting “Jews will not replace us” and “blood and soil,” two slogans appropriated from Nazi Germany. She also discussed “A Night at the Garden,” showing a 1939 gathering of 20,000 German-Americans at Madison Square Garden, where attendees gave the Nazi salute to their leader and beat up a protester who rushed the stage.

“The real question for today, is how do we challenge the ideas that drive these hate groups and continue decade after decade,” she said. “We need leaders in government with high ideals who believe in equality. We also need teachers who promote critical thinking, encourage their students to ask questions, and talk about human rights in their classrooms.”