Cause for celebration: The EM in HE Program turns 20 – School of Education & Human Development

Cause for celebration: The EM in HE Program turns 20 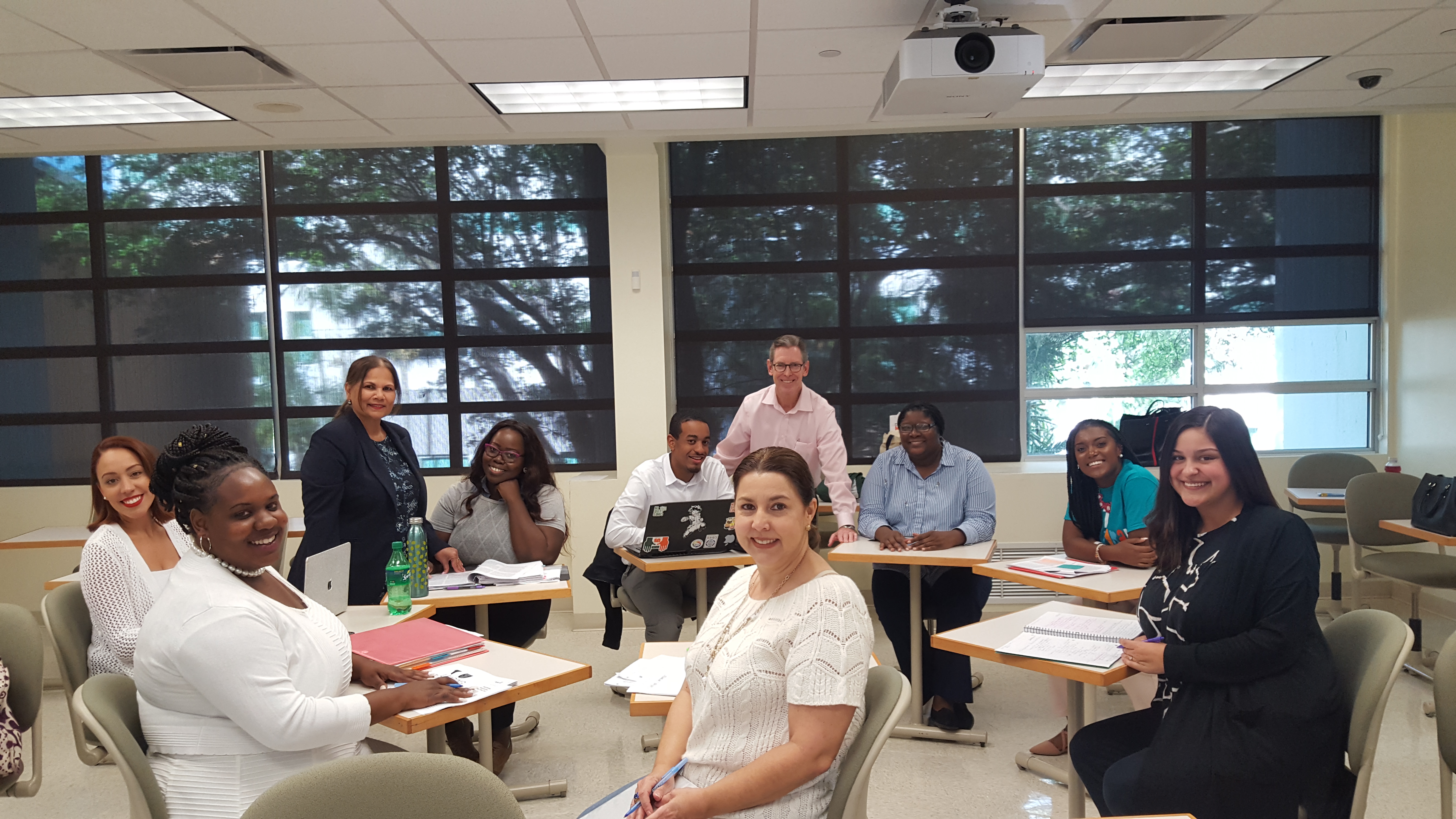 The country’s first graduate course of study in enrollment management was officially launched in Fall 1998 when a group of students, many recruited from outside Florida, came to UM for their MSEd degrees expressly because of EM. By May 2018, UM had awarded 152 of those degrees to men and women who have taken EM to the corners of the nation and globe, and 10 more EM track students were graduated in May 2019.

As it settled the frontier of enrollment management—both a philosophy and a practice—the Higher Education Program steadily, year after year, enrolled working professionals and recent college grads in Master of Science in Education degrees and certificate programs. By 2006, a second track was added, Student Life & Development, and more recently a third, Institutional Research & Policy Analysis, a collaborative effort of the HE and Research, Measurement & Evaluation programs that is slated to go online in Fall 2020. The strength of the MSEd program enabled creation in 2008 of a doctoral program, which evolved into the Executive EdD in Higher Education Leadership, an intensive, low-residency cohort program for working professionals from all over the world.

In this 20th year of EM in HE, we celebrate our current students, alumni and faculty. We want to pay tribute to faculty members Drs. Patricia A. Whitely and Scott Ingold for their steadfast commitment from the start, and to acknowledge the support of John G. Haller, who has taught with us since he became vice provost for enrollment management in 2014. We thank alumni for sharing their stories and photos, which we’ve collected here—along with the memories of founders and faculty Paul Orehovec and Scott Ingold.

Paul and Scott conceived the initial curriculum, recruited the first students, taught its introductory and capstone courses, and were—and continue to be—advisors and guiding lights. The following are their thoughts provided for their students, friends, and colleagues: 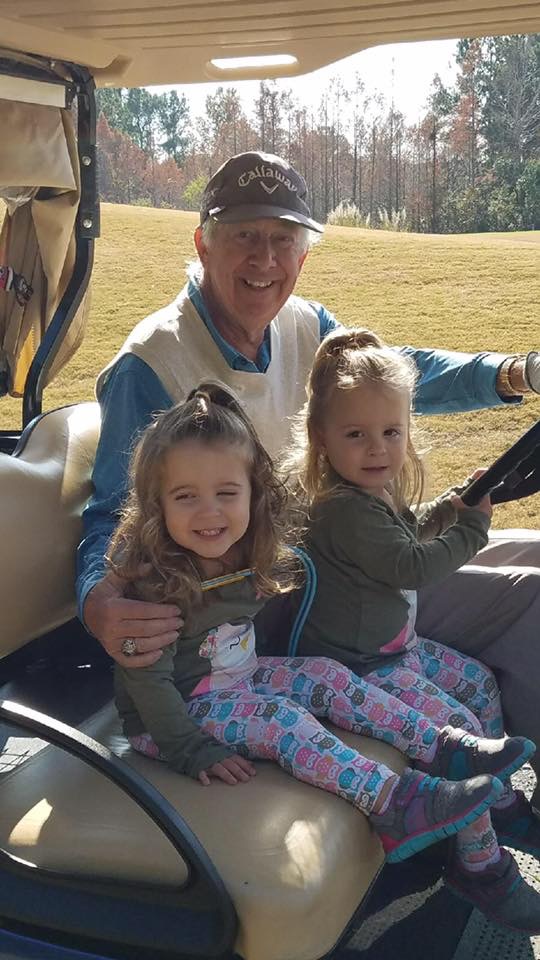 Paul Orehovec and twin granddaughters
at home in South Carolina

It started in the Division of Enrollment Management with the many discussions that took place each and every day in the late ’80s and early ’90s. Although enrollment management was being discussed throughout the country, very few colleges and universities were implementing these new concepts on their campuses. Many institutions that claimed to have EM were actually limiting the focus to the recruitment of undergraduate students. At best, they had an organizational chart that usually included admission and financial aid. Often, the financial aid office reported to admissions.

At the University of Miami, we were raising questions and taking actions that did not appear to be on the radar anywhere else in the country: Why was the enrollment management focus solely on student recruitment? What were we doing to improve the relationships and success of current students? Why wasn’t everyone at the University invested in the recruitment, retention and success of students? Why wasn’t the enrollment management organization expanded well beyond its own reporting lines? How might we blur the lines so that everyone felt a part of the team?

So we launched a series of “experiments,” establishing new positions in the division to take us in new directions, which included marketing, market testing, intense data analysis, the use of mathematical techniques to determine policy, cross-country focus group analysis, and brainstorming. Only a handful of other universities were moving in this direction at the time; today, many have included these approaches or outsourced them to companies to do it for them. I remain intrigued by the fact that other universities don’t appear to have picked up on market testing, linear programming, or other calculus-based programming techniques.

Perhaps the more important experiment was attempting to become more inclusionary in the enrollment process. This meant that we wanted to include more administrative offices outside our division, along with more faculty, so we needed to train and teach a wide variety of campus colleagues on what EM could bring to a campus and how it could impact virtually every office.

At the same time, our own division was getting frustrated with the turnover in young staff. It seemed we would hire good, young people, spend one or two years training them, only to see them leave with these new skill sets. Scott Ingold and I thought long and hard about how we could address this scenario. Enrollment management was an emerging field, yet there was no formal training program. This led us to design and campaign for an academic experience that could provide a new cadre of professionals to step into the field with enhanced skill sets. This is what led us to build the first academic program in the country that would help prepare enrollment managers for this professional field. If we could pull it off, UM would be a working laboratory for EM development. It started out as one class, then two classes, then a certificate, then a master’s degree, and eventually a doctoral degree.

When we set out to design a master’s degree program in EM, we wanted the educational experience to bridge several academic areas, as this is what EM is all about. The core of the program would focus on four areas: enrollment management, education, research, and business (especially marketing). In addition, we wanted a capstone project, an activity to intimately involve students. We believed these core areas along with the capstone project would benefit the student greatly when moving into the professional job market. We wanted our graduates to be first in America with a degree focus on enrollment management. This was and still is an evolving field that professionals need to be able to jump into right away. Thus, the EM program in HE was born, a special and unique relationship between the School of Education and the Division of Enrollment Management.

As I look back, I pay particular attention to two aspects: teaching in the program and developing the program. I loved both. For me, every Wednesday at 5 p.m. was a transition into a special world where I could teach and learn (that’s right, learn). I enjoyed challenging everyone in class, and I enjoyed being challenged. I especially liked the case study method. I wanted each and every student to pick apart a case, analyze the data, and produce solutions to attack the problem.

Two experiences in particular taught me that EM works. The first was at a meeting we started called an Enrollment Meeting, where we invited colleagues from a range of campus offices that affected students. The thought was that if we could get people coming together on a weekly basis to discuss enrollment process issues, the system would work more smoothly. I was surprised (actually, shocked) when someone from the business area of the university pulled out a brochure draft and gave it to me. He asked if we could take some time during the week to review the brochure and see if it would help recruit students. I thought I was going to faint. I knew we had “made it” in the evolution of trying to get everyone on board with helping to recruit and retain students when this professional business manager understood the importance of his brochure’s role in this effort.

The second experience was when an academic advisor in Arts & Sciences signed up for our certificate program. She already had a doctorate and many successful years running her department, one of the best advising programs at the University. As the intro class moved through the semester, I realized that she already saw herself as an enrollment manager. Everything she did in class was to learn more about EM. Everything she did in her professional position was to put that EM knowledge to use. It was a joy to see how EM could be everywhere.

Over the years, I have witnessed the success that many universities have had because of incorporating the concepts of EM. I have talked with colleagues who have embraced all aspects of EM; they seem to be the ones who have enjoyed their careers the most and who have been the most successful. At the same time, as a consultant, I have witnessed institutions and professional colleagues who just don’t get EM. They continue to work in their own cells and don’t get the community behind their efforts. They dismiss the concept of EM. There is a reason college presidents hire consultants, and one is that their enrollment is falling and the campus does not have an enrollment management culture.

I have had a wonderful career. I like to tell people that I went to college in 1966 and never left until I retired. Even after retirement, through consulting, I remained involved in this great field of education. I also tell people that I started my career in 1967 as a Resident Assistant (RA). I learned so much in that role that I took with me. I guess that means I have been at this for over 50 years. I have so many things to look back on with fond memories. The EM course of study and its students and faculty colleagues is one of my favorites. You have all taught me a lot. 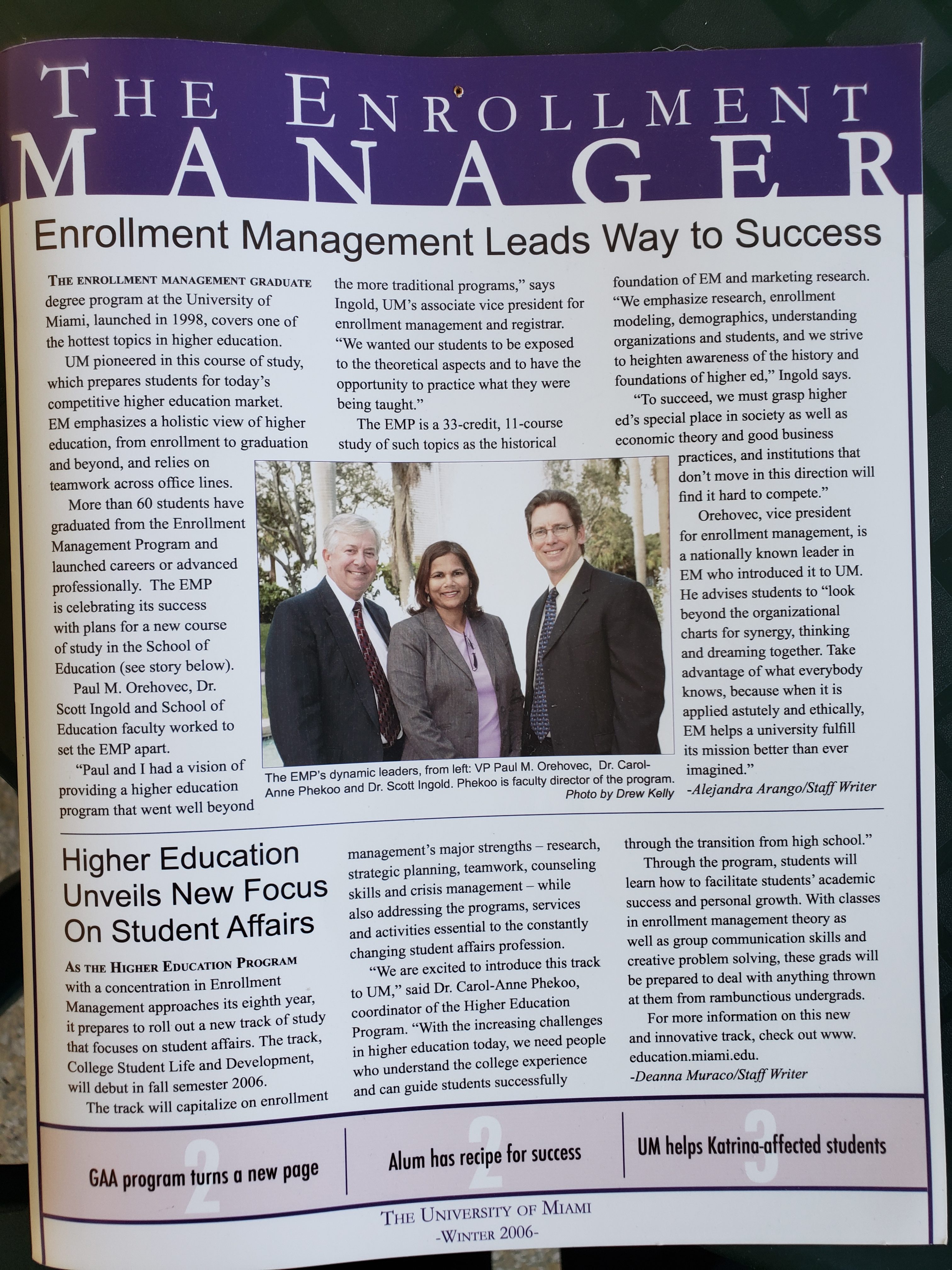 During the AACRAO conference in 1991, I talked with Ernie Beals, who was developing a doctoral program in enrollment management at Georgia State University. Ernie was excited about his new program, but as it turned out, approval and funding hit a snag and the program never got off the ground. At the University of Miami at that time, the Higher Education Program was experiencing recruitment and enrollment challenges. Its program director, Dr. Tom Angelo, led an assessment that indicated an academic track in EM might bolster the program. Once that opportunity arose, Paul Orehovec and I ran with it. I can remember spending hours developing the curriculum with Paul to present to the faculty. Fortunately, and based on our areas of expertise, we not only developed the curriculum but also developed a marketing plan. The faculty was extremely supportive, allowing us to use our plan to recruit a new cohort of students from outside the university (historically, the program had been losing money by enrolling university staff who used tuition remission).

We piloted our first EM class during the Spring 1998 term with nine students. Paul and I continued to team-teach the introductory and capstone classes until the Fall 2010 term. During those years, we taught over 175 students (in the introductory classes), hiring many as staff members and assisting in the job search for others once they completed the program. All in all, a strong job market existed for our graduates.

I’ve worked in higher education for over 42 years—more, if you count my years in residence halls as a graduate assistant. During most of that time, I’ve had the opportunity to teach, first undergraduate students at Miami-Dade College and Florida International University and then master’s and doctoral students at the University of Miami. Teaching has been a labor of love, especially when I think back on all the students I had the pleasure of working with. I count on each of you who followed a career path into higher education to continue the legacy of bringing the enrollment management philosophy learned in class to your institutions.