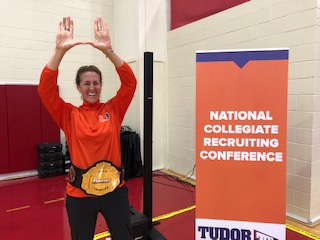 An Olympic gold medalist, Lindsay Shoop, M.S.Ed. ‘18, is a coach, speaker and author of a new book, Better Great Than Never. Her inspirational work focuses on her lifelong experiences as an athlete.

“I believe you need to embrace every step, good and bad, to find greatness,” she says. “As long as you learn throughout your journey, you can never lose.”

In high school, Shoop was an All-State athlete in basketball, but by the time she was in her first year at the University of Virginia, having given up on sports by then, she weighed nearly 200 pounds, was self-conscious of her height, and frequently missed classes to grab fast food for breakfast with friends. That all changed when she joined the UVA rowing team as a junior; and her grades, health and happiness rebounded. In just one year, she became an NCAA Division-I All-American; and in four, she broke a world record and won her first World Championship.

Steven Cadavid, Ph.D. ’11, president, KinaTrax, said, “It is our pleasure to donate to the U. The research being done in the Orovitz Laboratories can benefit from our markerless technology.  Through this donation, researchers can collect new data, conduct validation studies and develop models that go well beyond baseball.”

“By age 26, I stood alongside my teammates as Olympic Champion, gold medal hanging around my neck and tears streaming down my face as the National Anthem played, and the American flag raised,” said Shoop, who is also a three-time World Champion, and a National Rowing Hall of Fame inductee.

After moving to Miami Beach a decade ago, Shoop worked for the city’s ocean rescue team, before returning to rowing as a coach for Pine Crest School in Fort Lauderdale, then for Barry University in Miami Shores, and finally for the University of Miami.

“I rediscovered my love for rowing, this time as a coach,” said Shoop, whose teams at Barry won two Division II NCAA championships.

Recognizing that a deeper understanding of human physiology would help her become a better coach, Shoop enrolled in the Exercise Physiology program at the UM School of Education and Human Development with an additional focus on strength and conditioning and nutrition.

“That’s a rare combination, and it was ideal for me,” she said. “Rather than coaching from a conventional standpoint, I could learn and apply a holistic approach that could help young people move better and prevent injuries which allowed them to further excel and enjoy their sports.”

Throughout 2020, Shoop has also been delivering presentations for USRowing. During her talks, she champions practicing self-care to address mental and physical stress in order to become a better athlete in sport and beyond.

Reflecting on her coaching philosophy, she said, “When you are the best you can be for yourself, you can then be even better for other people.”