“An honorary doctorate is not something I had ever expected to receive in my life, so I am deeply touched that my work could have possibly earned such an accolade.” 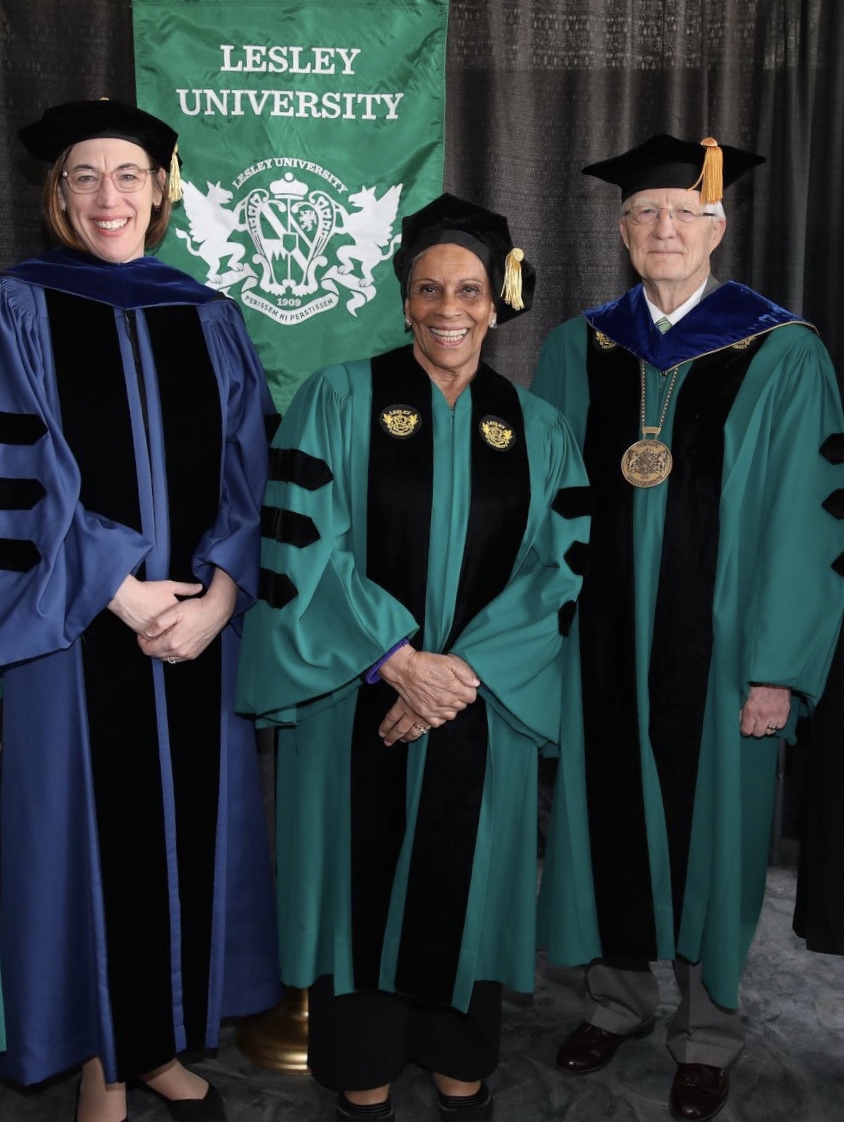 These were the opening words to this year’s Graduate School of Education commencement address at Lesley University, delivered by Dr. Beth Harry, Ph.D., Professor in the Department of Teaching and Learning, School of Education and Development. On May 18, 2019, she received an Honorary Degree of Doctor of Humane Letters by the Graduate School of Arts and Science at this institution, in recognition of her outstanding contributions to the field of education. In her introductory speech, Dr. Heller, Dean of Lesley University’s School of Education, powerfully described the impact of Dr. Harry’s work, as “illuminating the journey of minority children disproportionately assigned to special education settings and brought into the light of day, [and] institutional racism hiding in our everyday practices.”

While Dr. Harry has authored many publications that illustrate these and other significant contributions she has made to the field, Dr. Heller selected an excerpt from a poem found within the pages of the memoir of her daughter, Melanie, Bird with a Broken Wing as an exemplar of her work. This book sheds light on the family experience of disability, the interplay of systemic barriers, the role of culture and most importantly, the parental perspective. Beautifully written and charged with emotion, the poem serves as a powerful reflection on the experience of Melanie’s life and passing. Heller’s reading of this piece was appropriately chosen as a prelude to conferral of the honorary degree, a tribute to the little girl whose life inspired Dr. Harry’s 40-year career in special education.

Dr. Harry’s opening statement reflected her commitment to fostering understanding and seeking educational justice for children with special needs and their families. As a renowned scholar, qualitative researcher, and multicultural educator she could have used this venue to discuss pedagogical approaches or research methodologies; yet, in this platform, she elected to once again humanize the “ivory tower” of the academy to celebrate the living miracle that is Daniel, a 12-year-old boy with Down syndrome from Trinidad.

Dr. Harry shared how deeply and personally she could relate to the testimony of Daniel’s mother, recalling how the disability diagnosis sparked the initial feeling as if the world were coming to an end. The lives of their children, however, challenged both of these mothers’ preconceptions. The descriptions of Daniel’s talents playing the steel pan certainly defied common assumptions about Down syndrome. Typically characterized by deficits such as limitations in executive functioning, processing, memory and low muscle tone, Dr. Harry instead described a boy, using his arms and core muscles to produce sounds in perfect melody, rhythm and coordination. He has preferences for the songs he enjoys the most, that he, himself, has memorized—and even composed!

Dr. Harry added very poignantly, however, “It should not take the display of a special talent like Daniel’s, for Daniel and other children like him, to be seen as beloved members of their communities,” to which the audience responded with applause. She paused for a moment, adding, “And that’s why it is so important for us not to think we know who a person is based on some preconceived notion about who he should be. Rather, we need to stay open to the wonderful possibilities involved in getting to know another human being.”

In her concluding statements, Dr. Harry advised the graduating class of 2019 to be open to the changes that life may offer. “Just be sure,” she said, “that what may be perceived to be an ending, might be transformed into a beginning.” She emphasized how creativity would serve as an important piece of this transformative process, even if it means falling out of alignment with the ideas of others or some established norms. She noted, “Don’t allow the forces of conformity or your own fears of bending norms…to deny you the ebb and flow of creativity, the harnessing of your imaginations, as you respond to life’s challenges.”

Not surprisingly, Dr. Harry received a standing ovation from Lesley University’s class of 2019 for her inspiring words. As the colleagues, collaborators and the academic progeny of one who has embodied this very creativity and possibility, we also salute our own Dr. Harry for this career accomplishment and recognition. Her work, rooted in the legacy of her little girl, has blossomed into the celebration of the lives of children that people presume to know a great deal about.